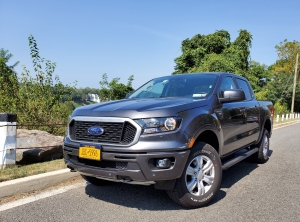 It is rare that people come up and want to know more about the cars I drive, so when the first person said to me “that is one nice looking little pickup” I responded it sure is.  But when it kept happening throughout the time I had rented this Ford Ranger, at gas stations, in parking lots, random people (yes all men) who came up and wanted to know what I thought about Ford’s small to mid-size pickup, it showed me that there is a lot of interest in this truck segment and in this brand. 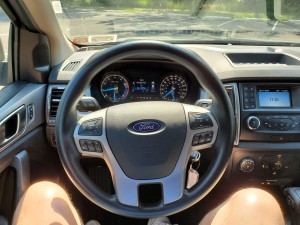 I will start off by saying, I really liked it, and the more I drove it, the more I liked it. Yes, this new Ranger does have some faults, but overall, this is one nice little truck. This was not a Ford media vehicle, but a rental from Avis/Budget that I arranged, first online through the Budget, then with the help of Auto Slash, they lowered the price by over twenty percent. And all at my local neighborhood rental car location. 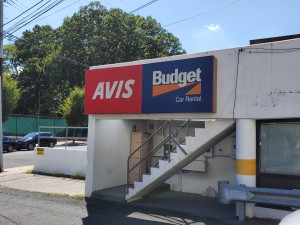 I needed to go on two trips over three days and did not want to use my own vehicle. So with some online research for a low price, as I am watching my pennies. I have learned that you choose the lowest price you can for the car you would be comfortable driving, as often the rental car may or may not have that level, and you often get a better car at the base price. Which is what happened for me on this rental. I had reserved a compact car and got a nice little truck.

As with any rental, I always track the rental price (even though this time it was just a day before) on AutoSlash.com, they promise the lowest rental car prices.  I like Autoslash, because they work directly with the rental car location and are not a reseller, (even though they seem to be a Priceline partner) taking the money and then assigning you to a rental car company. I have learned that working with resellers, often leaves you at the bottom of the heap, either in lodging or as I found from other renters when I picked up this truck, rental cars, as well. 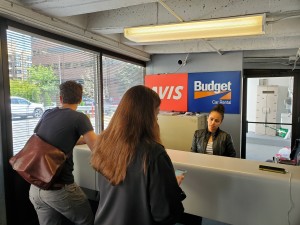 I get to the rental car location, and there are four customers ahead of me who are all complaining that they are not getting the cars they reserved and paid for, two of them had done the pre-paid third-party service, one had no reservation, and expected a car because she was an AVIS Loyalty card member, and the others were only going to accept the size class they had reserved. 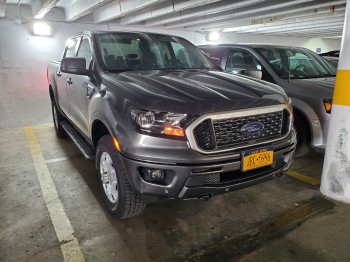 When it was my turn, I was sure I was going to have to wait, like those ahead of me. I was greeted Yes, Mr. Hopper we have your reservation, but we do not have the class car you reserved would you take a van or a larger vehicle. I asked if they had anything else, and indeed they had two pickup trucks. Why, Yes, a truck would be just fine, I had the choice between a Toyota TRD Tacoma and a Ford Ranger XLT 4×4, it came down to which had the least miles on it, and the Ranger won.

I have been wanting to review the new Ranger and had not requested one from Ford’s Fleet, this was going to be a perfect opportunity to see how the Ranger held up under some pretty intense usage as a rental fleet vehicle. This unit had been in service for about four months based on its build date, and with just under 5K on the odometer. It did show wear and tear, a few little scruffs, and scrapes, but in general, it was fine inside and out.  (I did find a penny under the back seat, a win for me, as I said I am watching those things.) And the engine cover was missing, which I found interesting, but it was nice to see the real engine without its plastic mask.

Ranger is more mid-sized than the small pickups they were when they first came out in the 1970s. After driving a couple of full-size F150’s recently, it was interested to see how the two Ford Pickup products differed. 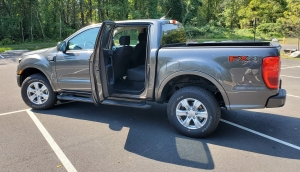 This Ranger XLT SuperCrew® a 4-door cab and comes with a 5′ Box, while the Supercab has the 6’ bed and just two doors, but a small back seat area. The 4-door version made more sense as a rental vehicle. Space is quite good, seats both front and rear were comfortable. Inside was well laid out, though I found the placement of the window switches on the armrest was not in a natural place, somewhat back, which is not an easy arm movement to activate.

One of the differences in the large and small 4×4 Ford Pickups is that the ride in the Ranger is very rough and quite jarring, especially going over bumps and expansion joints.  I expect it to be more because of the 4 x4 drive train than anything else.

The four-cylinder engine in the Ranger was a bit anemic, not what I expected for a smaller pickup truck from Ford. Even when in 2-wheel drive the truck took some spooling up to get it going. I found myself downshifting the ten-speed transmission to 6 or 7th gear to get a better response. While the overall MPG’s were close to 25 mpg, I was doing a lot of highway driving, in city driving the Ranger did not seem to be as miserly on fuel.

While the five-foot-long Pickup bed was small, though sizeable enough for most items you would haul, and it had the Ford factory installed Tough bed spray-in black plastic liner which was a nice touch, and a couple of tiedown hooks to boot. 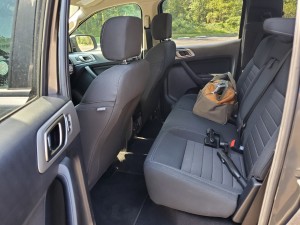 As a Rental, the four-day rental charge was $70.07 reduced from $83.50 as I returned it full of fuel, and it was on ¾ when I took it out, so they gave me a credit. Plus my $19.95 premium rental car insurance fee that I get through my credit card (and I have to say, it handsomely paid off once, so I have no problem paying for it.) I think my choice right now would be to rent or wait until they become available on the used market.

This little rental Ford Ranger XLT 4×4 was just dandy for what I needed. It sat up and gave a good view of the road. What I was surprised about is that it is not just a smaller version of the F-150. If it was, the Ranger would be a real winner of a small pickup.

What it is, is a pickup that is not as well thought out as the F-150, ergonomics for the driver, and the powerband issue were not up to F-series standards from what I have experienced with the larger pickups that I have spent time with.

Would I buy one? I sure would consider it, even though I found some issues with the powerband and price tag. I liked it for driving both in town and on the highway. Plus it is great looking, and you can’t go wrong there.

Would I rent from Avis/Budget & Autoslash again?  Wholeheartedly, YES!

Mr. Hopper is a life-long automotive enthusiast who enjoys finding out about all things automotive, cars, trucks, and more. He can be found on Instagram as DCCarGuy and Twitter as WWHopper

This vehicle was rented and fueled with my own funds and tolls were paid out of my own pocket. No compensation was received for this review.