Check Out Our YouTube Video Review on the Lexus ES350 F Sport.

Age has its privileges, and my first mistake was to tag a picture of the 2019 Lexus ES350 F Sport that arrived that morning with a hashtag of #V8.  Why? Because that is what these aging eyes saw on the window sticker. Or it could have been that I remember when the brand came to the USA with an 8-cylinder, while everyone else was doing a six.  Within moments a YouTuber who follows me on Instagram corrected me. And let me know how it was a V6 and not a V8. Then, not long after that one of my young compatriots coyly mentioned he too had seen the mislabeled V8 hashtag. Yup, Frickin kid’s, I mistook the 6 for an 8, wait until you grow old and dream of big powerful engines, when you are driving your electric powered whirligigs. 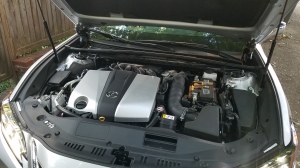 It was back in the latter part of the last century, the news was about upstart luxury brands, offshoots of Japanese economy brands. And while today, three remain Lexus has kept both tried and true to the concept of luxury all the while holding on to Toyota’s reliability, quality, and dependability.

While in the past 30 years, Lexus has become a leader. Toyota, the parent company, realized that it was time to put excitement into their models, with the We will build no boring cars ideology. Lexus’s ES line is often confused with being an upscale Toyota Camry.  Which had been considered one of the less exciting cars to drive.  And that just isn’t right. Especially in the F-Sport trim, the ES is not a Camry, or should I say the Camry is not quite an ES350 in F Sport trim.

What makes the F Sport special? 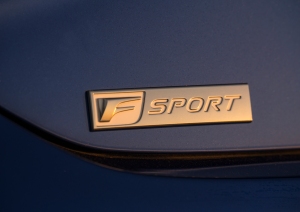 In the automotive world, you are either a Sport or a Premium Luxury, and bringing the two together rarely makes either side happy. Toyota does just that with a more sporty persona in the F-Sport as well as the luxury and tech that Lexus is known for.

Lexus’s high-performance models are named F Sport from the Fuji Speedway in Japan whose first corner, 27R inspired the shape of the “F” emblem. First brought to market in 2007 as a factory-sanctioned high-performance line, it succeeded the TRD (Toyota Racing Development) based L-Tuned of earlier in the decade. Now F Sport has expanded across the marque’s entire model lineup and not just limited to the IS and GS models as when it was first introduced.

A week behind the wheel of the 2019 Silver Lining Metallic with a red interior Lexus ES350 F Sport gave us the feel of the many features that come standard on the ES model, as well as the sporty aspects of the F Sport, more importantly, the drive experience.

Quite a comfortable sedan, especially as a long-distance road warrior, with plentiful interior passenger and trunk cargo space. Aided by the $750 Adaptative Variable Suspension, the ride was excellent and quite centered and controlled.  The 3.5 V6 24 valve DOHC Aluminum front-engine with variable valve timing and intelligent wide intake exhaust mated to an 8-speed Direct-Shift transmission, and front-wheel drive provided plenty of power no matter the need, with 22/31/25 in mileage.  Though it was not as powerful as it would have been with the original thought of 8-cylinder. (Which I will say on my first drive after the initial IG post, I thought to myself, this is not an eight!)

Driving the Lexus, you realize how big it is, parking it though, it does not seem large, and with the parking sensors and auto-brake both come in to play in tight spaces. Pulling into a space in a parking garage, it quickly sensed I was too close to the car in front of me, jarringly the auto-braking engaged quickly and securely stopping well clear of the vehicle parked in front of me. The Blindspot monitor with Rear Cross Traffic alert and parking assist with auto braking, a $1065 option is always an excellent option to have on any car.

While I marveled at the twenty-dollar Key Glove, but really is it necessary? And at twenty bucks, it would have been something that could have been acquired from a local artisan, instead of an optional add on.

Luxury Inside and Out

A lot of what is standard on the ES is nothing new or not found in other vehicles, interior ambient lighting, 10-way F Sport bolstered front heated and ventilated power seats with 2-way lumbar with Lexus memory system of driver seat outside mirrors and steering wheel tilt and telescope. And of course, sporty aluminum trimmed pedals.

It is how Lexus brings it together inside the F Sport that is special, the interior design, the quality touch and feel that makes you appreciate it as a Lexus. Something that did bother me was the $75 optional wireless charging option hidden away under the console armrest. I think all cars should come with wireless chargers. I did indeed use it, and it to charge my Samsung outfitted with an Otter Box Case. It did not overheat like some chargers do. Where I found myself frustrated, is I wanted to look at my phone, even if things were relayed to the car’s display. And yes I know we should not be distracted by our devices, cars are meant to be driven.

Some fun aspects of the F Sport are the moveable meter in the center dash, roadside sign assist, and the smartwatch and Amazon Alexa integration. All help you integrate closer to the car so that driving becomes one with the body and soul. 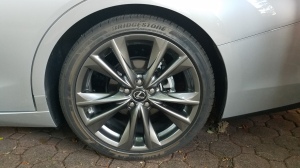 Ride comfort with the F Sport Suspension Tuning with Performance dampers front and rear gives you a soft but sporty ride. And the large 19-inch wheels were of course more sporty 235 40 R 19 Bridgestone tires which are different from the 215/55R 17-inch wheels and tires on the non-F Sport model. Though the smoked split 5-spoke alloy wheels were indeed attractive, I worried about scratching them.

Exterior styling with a unique rear spoiler and valance and that unmistakable and controversial front bumper grill get plenty of attention. Again, I worried that someone would bump into the grill and damage it while parallel parked.  And yes indeed the ES had the intuitive parking assist option.

Dealerships are often that first and only interaction that any auto buyer really has with a brand. Lexus ensures that commitment to the customer is a strong one, and has been very pro-active in this area long before other brands who tout it. The Lexus brand attracts a more affluent buyer who has an appreciation for the finer things in life and willing to pay for service. Here is where Lexus really shines. Their dealerships commitment to service, being one of the first to provide true concierge service, where a staff member will come to the customer to pick up their car for service and return it. This is something very attractive to women buyers, as well as those owners who have little time to attend to such things. It is our experience relayed to us from female friends that while shopping in a Lexus dealer. They now own Lexus vehicle because of this focused on the Brand’s owners.

Who is Lexus today?

A brand that has the reliability and dependability of a Toyota, expert dealership customer service. Lexus sells a wide range of sedans, sports coupes and of course crossovers and SUV’s. Customers of Lexus have enjoyed the best of Toyota quality and technology (Lexus is one of the first luxury brands to put hybrid powertrains into their cars) from the very beginning.  Expect great things to come from the brand as it continues to grow and respond to what their customers want.

This 2019 Lexus ES350 F Sport was provided to us by Toyota Motor Company and Lexus for a week to review, no compensation other than the use of the car was provided. Parking expenses were covered by myself as was any fuel used after the first tankful.