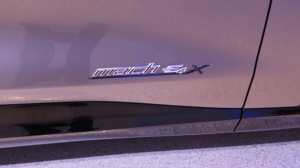 While there is a lot of controversy over the naming of Ford’s new five-door SUV Battery Electric Vehicle, one thing for sure is that consumers will buy it. Not because it is an SUV, not because it is named after the iconic Mustang, but because it is a Ford, and the one thing they have always done is to bring vehicles to everyday consumers.

Maybe I am one of the few that is old enough to remember a Ford model called the Maverick. If ever there was a Mustang-inspired four-door sedan, it would be that classic 1970’s sedan, smaller than cars were made before the oil crisis, though maybe not so fuel miserly. The Maverick had lots of inspiration from Ford’s pony car. With design features, like the grill, the body, and roof lines. It was also a well-priced piece of transportation that epitomized the era of WIN (Whip Inflation Now) and affordable to the mass market. Did anyone get upset because it looked like a Mustang? Nope, they were too busy being upset that the Mustang had been shrunk and that its muscle car machismo had been removed.

The Mach-E is going to be a great car because it is as classic as the Ford Motor Company itself. Mach-E has sharp lines as a five-passenger hatchback with SUV styling. It has an ample cargo space accessed by a lift gate, which is what today’s consumers want. And no matter how it is fueled, gasoline, diesel, hydrogen, or electric, it is a vehicle that buyers will immediately understand and be attracted to.  Ford has chosen to power it with rechargeable Lithium batteries, where the driver will plug in the vehicle, either at home or at any one of the many available EV charging kiosks nationwide.  Ford is the company that will make sure that people think of charging their car like they think of doing so with their phones. It can be done anyplace at any time, no longer will it be a big deal that it is an Electric Car.

Not because it is radical in any design sense, because it is radical in a mentality sense.  And from the ground up, it is a revolutionary vehicle. Developed by an in-house design and management group called Ford Team Edison, who has been given the task to come up with products quickly, and sharing ideas as well as resources across platforms. It is going to be a car that interacts directly with the one device that everybody has on their body almost any time of the day or night, their telephone. While others have had apps that connect your phone to a car, this one will tie the two of them together like a key and a lock, but in a more technological way.

Would you rather have it called F-150 inspired? Take a look at any of the iconic Ford products already out on the road; you see decades-old Ford F150’s, Explorers, and yes, even Mustangs that are everyday workhorses or cherished members of the family.

Ford had very dedicated brand loyalty to two strong products, the Mustang and the F-150.  Using Mustang, an already identifiable American icon that is very relatable to car consumers.  People buy and drive the Mustang because it inspires them, and they will buy Mach-E. And because it is electric powered, that will just be part of the experience.

Electric Vehicle For The Everyday Person

The biggest thing that scares people about electric vehicles is the issue of Range Anxiety. Like when the fuel gauge light is on, and you hope you can make it to the gas station.  This is the “Where will I charge my vehicle,” and “How long will it take to charge?”  At this point in time, you could not drive coast to coast in an EV over the course of a few days, because you would need to spend time charging, which would prolong the trip by about a quarter of the time or more. In reality, most people who drive every day, so so in short trips followed by time parked at work, home, shopping, or elsewhere. Plugin when parked, and when you are finished with your stop, unplug, and in most cases, you will have a fully recharged battery. In today’s modern civilization, it is rare to go someplace that does not have electric power. There it is in homes, garages and pretty much everywhere you can drive to today.  Of course, there are remote exceptions, like out in the wilderness, which most people would not take an EV to in the first place. 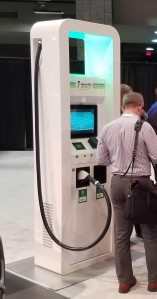 EV Charging cords will become the new cellphone charging cables. And as technology continues at its current pace, wireless charging is just a matter of time. If you are wired, you no doubt have an outlet nearby.  What we will see over the next ten years is cars being charged in different ways. Pretty much every place you go will have EV chargers or electric outlets powered by a variety of sources, the already established grid, by solar and wind power.  Plug it in, be it in your driveway, garage, or at the local coffee shop. Expect to charge your car, much like your phone connects wirelessly in the next few years as well.

What Impressed About The Mach-E

How normal it is. In both design and function. The Mach-E is an every day modern car. There is really nothing outrageous or different about it, other than it is powered by batteries. Which in today’s world is not even new or different.  The Mach-E has space for people and cargo, plenty of space for our modern lifestyle.  Inside it is like many modern cars, with a big center tablet-like screen and a small dash gauge screen in front of the driver, and it has a steering wheel, and pedals like the cars have had for decades.

Mach-E is intensely mobile device friendly, seeing the mobile device as the driver’s identifier, more than just a key.  (The prototype we saw, indeed had a keyfob that locked and unlocked the car.) Mach-E will read the information about the driver from the registered phone they are carrying. This information is their music taste to their driving style, from whom they communicate with to where they go.  And when you think about it, indeed your cellphone has all that information already stored within it.  How lost do you feel when you leave home and forget your phone?

And not just one phone; the new Mach-E welcomes multiple devices, as most people now juggle a work and a private device daily.  You can connect and charge your phones wirelessly within the Mach-E, let’s not forget the in-vehicle internet connection, which is already a standard feature in many new cars. Interior design is no different from many Ford products now on the market with handsomely stitched seats, a well-designed dash, and door panels made from touchable materials. The Mach-e’s cabin offers comfortable seating positions with plenty of leg, shoulder, and headroom. Plenty of cargo space in an easy to access hatch.  Upfront hosts a front storage area FrontGate as Ford calls it since others refer to them as merely a frunk. Ford’s Frontgate is designed to be durable and can be used for storing dirty wet items, or maybe used as an ice-chest/cooler. As it has a rigid plastic liner with a bottom drain, allowing it to be hosed out when cleaning is needed.

Exterior design, while many have complained that it is bloated. Has anyone even looked at other SUV’s on the market today?  To have as much interior space as the Mach-E has, it needs to have larger exterior proportions. Mustang-Inspired or Maverick-Inspired, it says directly this is a Ford product with its classic lines and of course, the bucking wild horse and the signature sequential tri-bar tail lamps that say clearly MUSTANG.

While it is not too early to consider purchasing the Mach-E, you can pre-order online now.  We were able to see the prototype in person at the New York City Media revel on November 18th, 2019, and look forward to experiencing the production Mach-E when it becomes available.  The Mach-E and its battery packs will be built at the Cuautitlán Mexico Ford production plant. And Ford is partnering with Electrify America for the EV charging infrastructure.

Words and Images by William West Hopper.  Mr. Hopper is a life-long automotive enthusiast who grew up as a child in a house with a Ford Country Squire Station Wagon. Today, Mr. Hopper is sought out for his knowledge and understanding of the automotive business and drives an EV as a daily driver.  You can meet Mr. Hopper at the upcoming Washington DC Auto Show in January of 2020, where he will be giving VIP tours.