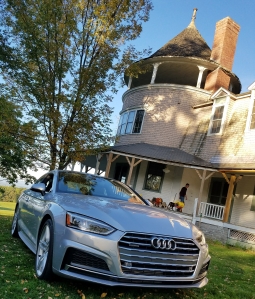 View the Queer4Cars YouTube Video of the Audi A5 Quattro Coupe here.

The A5 Coupe that Audi of America provided for us to attend the Hero Fund America Road Rally in update New York was an easy and fun car to drive, and one we would not mind as part of our daily fleet. Well balanced with tight comfortable handling was one reason. Easy on the budget and on the eyes, this car is just fun in every way possible. Seriously!  I can see why so many young professionals become Audi customers.

Audi, which has long been the luxury brand for the people’s car brand Volkswagen. Though when you look at the history of Audi, it is often as much a contender in high-speed road rallies with their competent all-wheel drive and fuel-efficient engines, tight handling chassis, as it is as a luxury car.

Light and nimble in handling was what I first experienced behind the wheel, it was not long before I realized I was going way over the speed limit, the A5 is effortlessly FAST!

Where to start on the technology on this vehicle? It is more than just the dashboard. While having detailed GPS is considered standard in upmarket vehicles, Audi’s just is so much more vivid and attractive. The incredible detail in the display of the Google Earth-based navigation system immediately grabs your attention. Similar to the difference between early black and white TV and today’s 4-K video from what other onboard automotive GPS systems display. Does it provide more information, probably not, but visually it is more pleasing. And it does not stop there, the dash of the A3 was as well detailed as any high-performance jet plane just more luxurious.

Following in the other high-line German vehicles Audi has a handwriting pad area as well as a “knob” to command the center console screen. While the writing feature is not easy, as my handwriting is terrible – anyone who has signed a screen for a credit card knows how hard it is to make handwriting legible. In this day of voice recognition and artificial intelligence, the spoken words are about as good, I suppose after training the AI within the vehicle you might have more success than I did

Subdued and classic, while Audi has never been known for flourishes, the smooth and clean sculpted lines of this A5 Coupe are elegant and graceful, while not all that eye-catching with added extras. And that is not a bad thing, as the lines are purposeful and elegant defining a very well proportioned body.

We took the 2018 Audi A5 Quattro Coupe on a 900-mile drive from Washington DC to Sharon Springs NY and back through back roads, highways as well as city streets, and even unpaved country lanes. Every mile was a delight as the A5 was nimble and fun to drive. The ride, while this is a sports coupe, it was still comfortable, with even on the washboard lanes of the New York Throughway. Road-hugging as the four drive wheels gripped the pavement. The all-wheel drive was nimble with a tight turning radius making the A5 feel smaller than it actually is.

Inside well laid out instruments, comfortable seats with thigh extenders in a spacious cabin for the driver and front passenger as well as trunk. Though not for those who would have to squeeze into the rear seat. While this is a roomy coupe, the rear seating would be tough for anyone larger than a child.

As one would expect in a car at this level it had an exceptional Bang & Olufsen sound system. Even with a CD player hidden in the glovebox, the audio system provided all the modern amenities with satellite radio as well as Bluetooth and USB inputs from a smartphone brought into the vehicle.

The A5 ran a powerful 2.0 liter 252 hp i4engine and 7-speed Quattro all-wheel drive and provided 33 mpg average over the thousand mile trip.

With all the love here the only thing we found annoying was that with the start/stop engine cutoff, that happens at stop lights, the power steering would become stiff until the engine restarted. And with all the other great things this A5 Coupe had to offer, that was something we could overlook.

We loved our week in the Audi A5 Coupe. It was fun to drive, stylish, and comfortable. With plenty of power, we found ourselves zipping along more often than not. Even in the slowest of traffic, the Audi A5 was a delight to be driving.  This is a car that would be a first pick for a car to drive every day.