Hybrids, RWD and new architecture, all of this is a big part of Ford Motor Company’s SUV plan, and what we heard from Ford’s Craig Patterson, SUV Marketing Manager at a recent breakfast meeting held at Ford’s Washington DC office overlooking Pennsylvania Ave.

While we knew much of this information, we got some more tidbits about what else the Blue Oval has in store for the coming years.  And it is not just the Ranger T-6 platform-based Bronco; Ford has several things in the pipeline for the USA, as well as the rest of the world.

Ford has let us know that they will not be selling sedans here in the USA, focusing on SUVs and pickup trucks. And while that may be true for the US Market, Ford is truly an international operation supplying products globally.   And they will continue to actively build and sell sedans elsewhere in the world.

Ford is enjoying record sales of their SUV’s over the last few years and is bringing out the All-New Explorer and Escape for the 2020 model year.  We have driven both of these volume leaders and can easily understand their appeal to consumers.

What the consumers are going to appreciate, though they may not realize the new technology built into all of Ford’s products. Hybrids with their smaller and lighter batteries are big news, as they are not going to affect the passenger or cargo space, and with a lighter weight, this is a significant impact any hybrid vehicle. 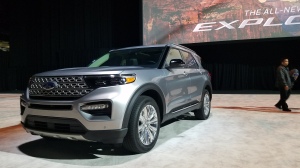 Explorer, the original Family Adventure Vehicle, is and has been built at the 95-year-old Chicago assembly plant the one that was completely retooled in 31 days this year to build the new Explorer. The construction process used barges on the Chicago River to deliver building materials and store what was going to be reused as the road network through the city to the plant could not support enough truck traffic to manage the construction

Questions about the reasoning behind the All-New Explorer going back to rear wheel drive were answered with some simple facts.  Second generation (2011 to 2019) model Explorer was built on a front wheel drive platform to help with fuel economy. In direct response to the high 2008/2009 fuel prices. This new 2020 my rear wheel drive platform allows for an easy bolt-on of the hybrid system, as well as to be able to use the 10-speed transmission with SelectShift® capability to attain better fuel economy numbers.

The all-new 2020 Escape along with it’s hybrid and plugin hybrid (PHEV) versions, will come to dealers this Fall. Trim levels come with S- the base, SE SEL, and Titanium, if you want a Hybrid powertrain, it is only available in SE Sport and Titanium trim level.

Edge ST a performance-based crossover SUV is being released now. While Edge is not that new, being refreshed in 2019, the performance ST package is what is new to that model.

While EcoSport, the lowest priced and smallest in Ford’s SUV line up, appears to be just a placeholder for a low-cost entry-level SUV.  Not very highly regarded by the automotive press, and a vehicle we plan on driving very soon.

What we heard that impressed us

Every vehicle Ford builds now has a built-in modem to let it communicate. Like your smartphone, AI Speaker like Alexa and Google, Ford vehicles will soon be communicating with you, the infrastructure, and the other cars around it.  And this is one of the reasons that there is now a big push across the board for the next generation of cellular data communication.

What is right around the corner? 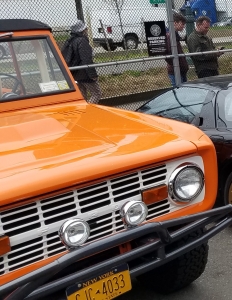 Bronco, yes, Bronco, it is coming sooner rather than later here in the USA, and what is being hinted at is that there will be a smaller, sportier, more car-like, having the sportiness of a Mustang and the usability of an SUV version following closely on the Bronco’s heels is in the offing. We at breakfast, named it the Buckaroo, following closely on the Bronco’s heels. 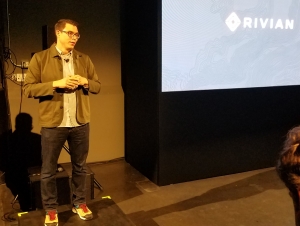 We will see if this is the battery electric SUV that has been hinted about, though when we bring it up with Ford team members, they seem to discount it — saying that when it comes to Battery Electric Vehicles (BEV), they are still in the early stages. When asked about the partnership with Rivian, that relationship has not been flushed out yet, while the investment has been made, not much has been done since that announcement.

Another topic they acknowledged, but with little information is about lower-priced vehicles; it seems the below $25K market is being missed by Ford.

No Compromise – Smart vehicles in a smart world – we expect that Ford will be leaders in whatever they do, though not outwardly well calculated. New Tech and new models will come to market when Dearborn decides to do it and not before.

Mr. Hopper is a long-time automotive enthusiast and current President of the Washington Automotive Press Association. He is based in Washington DC and thrives with the help of good friends and colleagues.

One thought on “What is Ford Up to in SUV’s”