After attending an introduction event for Jaguar’s EV Racing in New York City, last year, I have looked forward to the opportunity to spend time and experience life in a luxury EV. This summer, a Photon Red First Edition Jaguar I-Pace showed up in my driveway.

While the world is focused on SUV’s even as they pertain to electric-powered vehicles, Jaguar has nicely put together a sleek hatchback, that is a luxury sedan, sports sedan, EV and with the full-size hatch, all-wheel-drive SUV. And the adjustable suspension helps on or off road.

First and foremost, it is a Jaguar. You can tell  Ian Callum kept with the brand’s design language using angles to replace the curves of the Jags of my youth. More a 1980’s than 1960’s look, while still quite current. Aerodynamics is the name of the game when trying to stretch every electron into a mile, and with this I-Pace, you have a 230-mile range on a charge. And selling it as a luxury SUV, and sports-sedan in one. This one has all-wheel drive and an adjustable suspension that you can raise and lower the vehicle for off-road travel if needed. 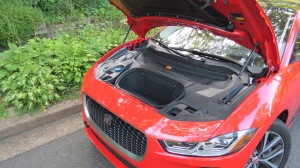 While you will not find anything under the hood, or as it is known the “frunk” or boot, which is the proper British terminology, other than small cargo space. It is almost not worth opening.

Where is all the power coming from, you ask?  Well, two electric motors that produce 394 horsepower and 512-ft of torque are fore and aft with a 90-k Wh battery pack that is mounted low and provides a 76 MPGe combined.  Actually, the only way to see anything close to the powerplant would be to put it on a lift and take it apart. So for us, we never got to see anything but what the promotional material shows. Single-speed transmission with simple push-button controls and separate buttons for mode settings give you all the control you need in this EV.

Should I have range anxiety? Well, range anxiety is a part of the current EV driving experience, so it comes with the territory.  It did not take us long to figure out how to cure that and enjoy the drive in this iconic brand’s EV 400. We found both pay to charge, and free-to-charge locations via the Plugshare and ChargePoint apps. Which provided fast chare options while we were out, though often not in places we were initially going, or maybe wanted to go.  As well as plugging into our 110v home outlet for a trickle charge, of about a mile an hour.

How do you start an EV

Like with most modern cars the RFID keyfob has replaced the switchblade or knife blade key, and Jaguar feels its owners will be active and may want to wear their key like a fitness tracker, so they provide an activity key, a black band you wear on your wrist that can get wet if you go kayaking or sailing, or surfing.

Aerodynamics or Tesla design copy? How do you get the door handles to pop out?  Having the key in your pocket and activating the door handle by touching it, front or back, or hitting the traditional keyfob unlock button makes the door handles appear from the side slab of the I-Pace.

An important part is even if the I-Pace doors are unlocked, the charging plug is still locked onto the charging port, and you have to unlock the car again (even if it is unlocked) to release the plug. 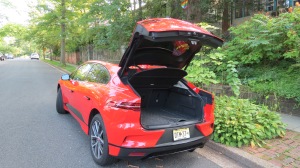 While the frunk is small, not to worry the conventional rear hatch has plenty of room with the 3rd-row seats up or down, if you are carrying anything, and the four-doors open wide to give you easy entry and exit to the vehicle for all the passengers. Two bucket seats up front and a sizeable split-bench seat in the rear. And as the I-Pace is a wide car, there is plenty of room in that rear seat for three people. 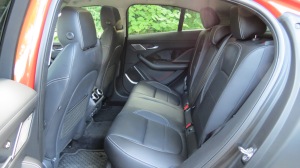 Open the hatch, and you can load large items, put down those rear seatbacks and the long flat cargo floor is easy to load in and out of.

Price – EV’s are not cheap 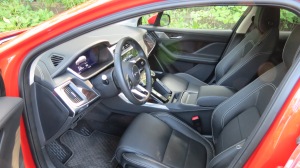 First of all, EV’s tend to be thought of as the play toys of the Rich, or those that want to be seen as financially successful. Tesla owners feel they have the sole ownership of the upscale EV space. So when Jaguar quietly stepped in without fanfare and put the I-Pace on the scene, we knew the price tag would be comparable. 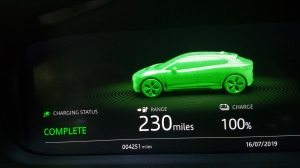 Starting at just under $70K for a base Jaguar I-Pace, but really whoever buys a base car?  While there are a few who are looking for basic transportation, and the Nissan Leaf’s and Kia Niro EV’s may work well there. When you get to the level of luxury that Jaguar represents you want to add bells and whistles to your whip. Our I-Pace, the First Edition, 400 AWD I-Pace stickered out at just under $80K.

Now EV enthusiasts will tell you all about the tax incentives and all, but still, you have to buy something before you get a tax break for the purchase. Well, there is the free charging, when and where you can find it. 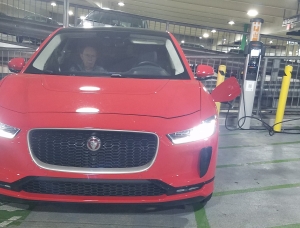 As they say, nothing is free in this world. You get what you pay for!  And indeed when it comes to EV Chargers, I would agree about that.  While Tesla owners rave about their own (and totally proprietary, chargers. So don’t even think about plugging in there if you are not driving a Freemont Cali built the car. Charging stations are located all over the country, which is a beautiful thing indeed. Many are at commercial centers, though some gas station | convenience stores are adding them, most EV owners have to rely on public charging stations.  Finding them through Plug Share, Electrify America, and Charge Point, as well as other app-based programs,  are expanding. We discovered that Charge Point seems to have a better handle on their chargers, and they tend to be better-maintained infrastructure.  We found that newly constructed parking garages with EV charging as part of the design are better than those that are retrofitted. If for no other reason than the number of chargers.

Charging at home, if you have installed a 240 V dedicated EV Charger, you will do better than using the supplied charging plugged into a 110v grounded home outlet. The added cost to your home electric bill will help you decide if an EV is right for you.

Charging at your place of work, if you are lucky enough to be located in a location that provides charging for EV’s all the better. I have seen solar-powered chargers as well as banks of chargers in office building garages. 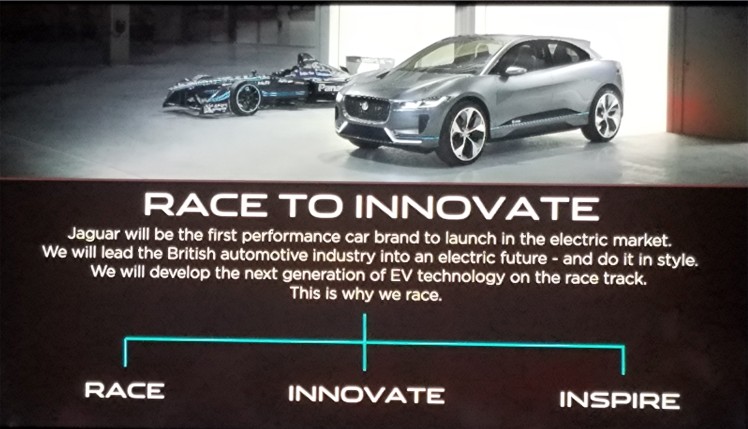 Where does this E-Grand Prix racing come into play?  For Jaguar, racing is such a part of their heritage; it makes total sense that they are early participants in the sport of racing EVs. Jaguar and racing are like Milk and Ice Cream, they are even better together.  Racing has always been a proving ground for automotive engineering, as it is some of the best testing that any vehicle can go through.

In 2019 Jaguar I-Pace wins World Car of the Year Awards presented at the New York International Auto Show, and we were there (at the next table when the awards were presented.)  And justly so, Jaguar has brought forth a great product in the early days of modern electric vehicles.

All opinions are his own. Mr. Hopper received no compensation from producing this post. He was given a week with the Jaguar I-Pace that arrived with a 60% charge, and he returned it with a 100% charge.